After bench and pilot tests in 2008 and 2009 overseen by CDM and coordinated by Air Products and Chemicals, Inc. (APCI) and APTwater, the HiPOx® advanced oxidation process (AOP) technology was ultimately shown to achieve all goals of atrazine reduction and bromate formation control while also providing virus disinfection credits. Unlike competing technologies, one major benefit of the HiPOx process is that it does not produce any additional waste streams. Based on the results from the pilot test on water representing “worst-case” conditions, the City of Wichita authorized APCI’s construction of a 30 million gallon per day (MGD) surface water treatment using HiPOx technology. The plant is designed to meet Primary Drinking Water Standards’ (PDWS) maximum contaminant levels (MCLs) as required by the Kansas Department of Health and Environment (KDHE).

One of the principal components of the City of Wichita’s Water Supply Plan is artificial recharge of the Equus Beds Aquifer using surplus surface water from the Little Arkansas River. The aquifer is recharged during high-flow events such as spring and fall rainfall storm water surges. The ASR Program area covers approximately 125 square miles of the Equus Beds Aquifer that includes municipal, industrial, irrigation, and domestic users. The water must be treated for recharge or direct injection.

The initial design of the 30 MGD surface water treatment plant for ASR consisted of river water intake pumps followed by a sedimentation basin, UF membranes, and chlorination. However, atrazine was discovered in the storm water from nearby agricultural runoff. Since chlorination treatment has no impact on atrazine, treatment alternatives were required. Powdered activated carbon (PAC) was eliminated from consideration due to increased chemical & O&M costs and regulatory concerns over the resulting extensive on-site waste solids handling. Use of granulated activated carbon (GAC) adsorption was also cost-prohibitive and would have also resulted in significant additional waste streams. UV treatment was ineffective against the high turbid waters off the UF filtration system. Other AOP technologies could not provide bromate control.

APCI’s local representative Mr. Michael Rudy of Environmental Process Equipment Company (EPEC) introduced HiPOx technology to the City of Wichita and CDM for their consideration. The technology was evaluated because of its ability to destroy atrazine while simultaneously providing disinfection and its ability to provide bromate formation control without producing any additional waste streams.

In December 2008 and January 2009, a series of HiPOx bench tests was performed by APCI and APTwater to evaluate the process conditions. Since storm water surges have highly variable water quality, testing was performed on filtered river water at varying water qualities representing the worst case conditions that the HiPOx technology would have to treat. The filtered river water was spiked with varying concentrations of TOC, bromide, and atrazine. Initial results indicated the HiPOx technology’s use of ozone and hydrogen peroxide was significantly more efficient than ozone alone for atrazine destruction. Additional testing demonstrated that the use of ozone and hydrogen peroxide was more effective than ozone alone at controlling bromate formation below the MCL of 10 µg/l. The final bench testing was conducted on water simulated to the maximum design criteria conditions (TOC, alkalinity, bromide, and atrazine levels) to determine the ozone and hydrogen peroxide dosing levels required to destroy atrazine below the MCL of 3 µg/l while simultaneously maintaining bromate control. Another important treatment goal was to achieve the disinfection credits required for virus inactivation. These treatment goals were based on regulatory requirements for drinking water as established by the Kansas Department of Health and Environment (KDHE), which required monitoring of Primary Drinking Water Standards (PDWS) MCLs for this project on a more stringent frequency than it requires for the City of Wichita’s public drinking water systems.

Based on the successful bench test results, the City initiated HiPOx pilot testing in May 2009. Pilot-scale testing was designed to simulate the full-scale treatment system and included collecting river water during an actual storm water event and running it through a UF membrane pilot followed by a HiPOx system. Pilot challenges included a remote site with limited water storage and intermittent plant operation.

The HiPOx system operated at a flow rate of 20 gpm. UF effluent was collected by CDM in storage tanks to allow for spiking of water quality parameters to meet maximum design conditions. The pilot-scale testing also included an evaluation of virus inactivation using MS2 bacteriophage spiking. Because HiPOx technology has been accepted by the State of California for 5-log reduction of poliovirus in Title 22 water reuse applications, the correlation between MS2 and poliovirus developed during that study was accepted by the KDHE. 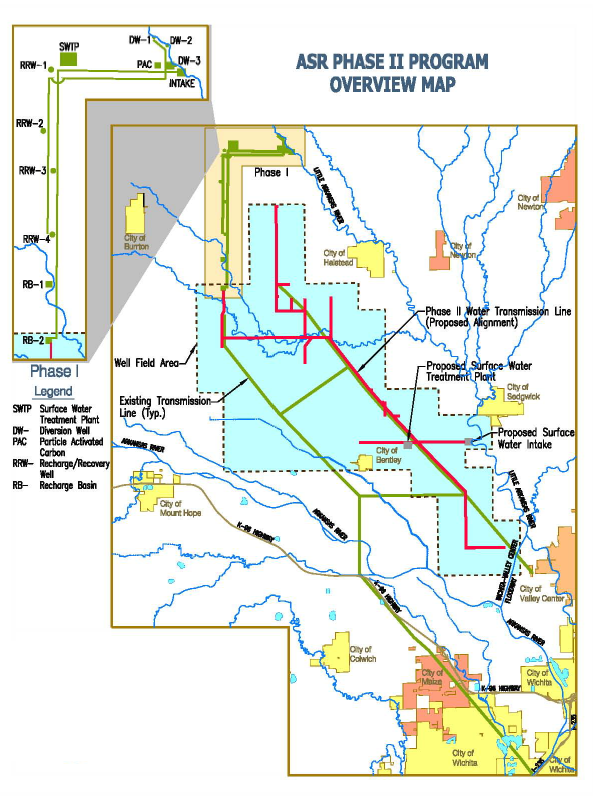 After over 70 test runs and over 500 analyses performed in triplicate, APCI and APTwater’s pilot-scale tests confirmed that the HiPOx technology could simultaneously achieve atrazine destruction to below 3 µg/l, bromate control below 10 µg/l, and an equivalent 4 to 5 log reduction of poliovirus. Based on these results, CDM and the City of Wichita recommended HiPOx technology for the ASR project with subsequent approval by KDHE in September 2009. The project is currently in the construction phase. Full-scale startup of the 30 MGD system is expected in the spring of 2011.

For more information on HiPOx AOP technology for municipal systems over 1 MGD, please contact APTwater. at (916)779-7651.